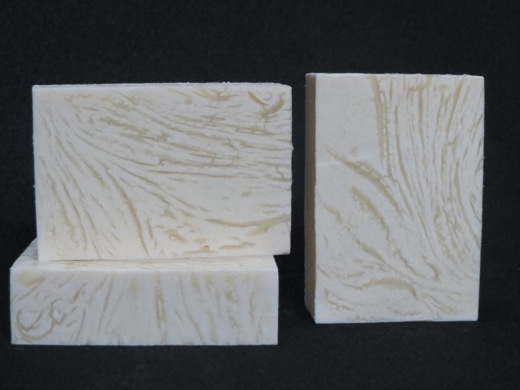 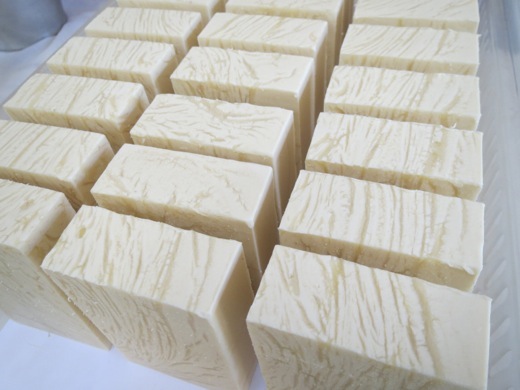 When did the dominoes soap, the first attempt was a failure. The sudden increase in viscosity after the trace , when pouring the mold , eventually overthrow the straws because the mass had no fluidity, accumulated in the center , and then gained height spread and dragging the straws . Not to miss the mass of soap removed the straws and put the two parts ( going to use two molds ) in a mold only . I noticed that there was formation of a gel intense and demolded after 24 hours , it was already possible to notice this drawing at the top of the block and cut when I saw that the entire block with this design was different and beautiful, reminiscent of the travertine marmore.

Notice then that is not a decoration , something that was planned to give this effect , it is a defect , handsome, but a defect . Let then the explanation of what happened , within a reasonable understanding of the phenomenon . The trace was accelerated I used a mixture of essential oils – lemon , eucalyptus stageriane and citronella, 3 % ( w / o) in equal parts and one of them , the lemon potentiated the trace acceleration . When I added the mass and felt there was an interaction immediately stopped homogenize , divide the dough into two parts and poured in the mold the volume small, but it was too late the viscosity was inappropriate to make polka dots , that just dropping the straws .

How to put it all together in a mold just to keep the soap , the mass ( 4.3 kg ) occupied almost entirely the mold . This mold (18 x 30 x 8 cm ) and the volume occupied by the mass ratio is conducive to the development of the gel phase with great intensity. The mold with 20 mm MDF with lid , is a great insulator , little heat is lost .

Most times I get partial gel in this mold , but this time the gel was full due to the higher volume of mass. You notice the difference partial gel by  color, darker in the center and lighter edges . Sometimes it is difficult to observe the full gel, there are no such differences can be noted. But whatever the gel anything resembling the soap obtained from this drawing , but the gel is important to have this effect , this defect .

Let us understand what is the gel. When conditions of emulsification (trace) is complete , the saponification reaction begins to be continuous , and generates heat as the saponification chemical reaction is exothermic. This heat is dissipated at the edges and in top of mass of the soap, but it is in center core is where the conditions are perfect for accumulating heat – dissipates less heat , and at this point the temperature increase is substantial. The liquid crystalline molecules acquire mobility and there is the formation of a temperature gradient from the middle to the ends through which you can see the color change and, in some cases, the location is bright and also the viscosity of which decreases . Often this gradient formed will lose the heat of reaction and also decreases by not supplying sufficient heat to keep more the gradient gel and thus ceases to form a partial gel . When the reaction is longer (higher soap mass) , and heat loss is inhibited , the gel is spread and has the full gel.

When I felt a mixture of essential oils was accelerating the trace , stopped and homogenize this mixing time was not enough to mix well to incorporate the oil in the emulsion . When the gel formation , the spread of the temperature gradient ahead is not homogeneous but one local mass with different concentrations of soap and essential oil mixture  . This discontinuity of the medium caused the gel to leave trail in the form of drawings which gave a similar effect designed décor . Dare to say that this gradient gel there was even a mass transport a physical displacement of mass, mass essential oils emphasized that the drawings . The color was also changed, a beige color and has the same amount of titanium dioxide domino soap , which was quite white.

Already tested this soap prematurely and noticed nothing unusual that makes me assume that the performance has not changed or been compromised . The soap has a basic formulation of palm oil / babassu / olive oil / castor – 35/30/30/5 , SF 5% lye concentration of 30% and titanium dioxide ( 1% o / o).

There is a beautiful effect caused by a beautiful defect ! An effect that perhaps can never be reproduced exactly , was a single moment of the mysteries of chemistry of the soap. 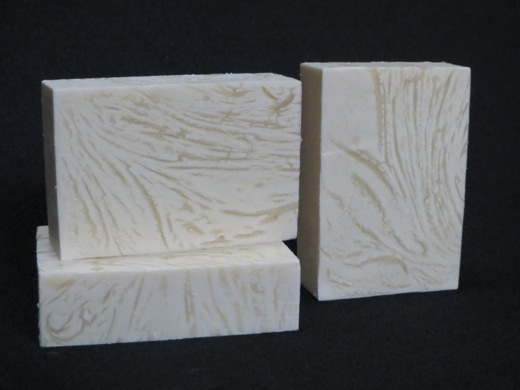 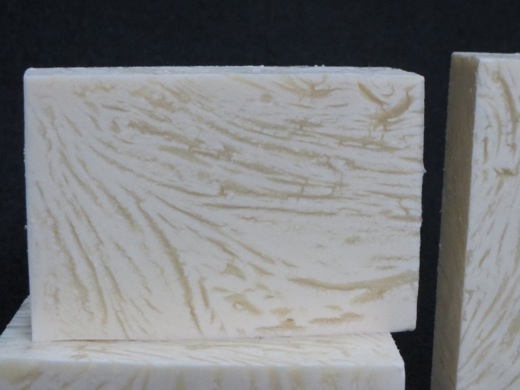 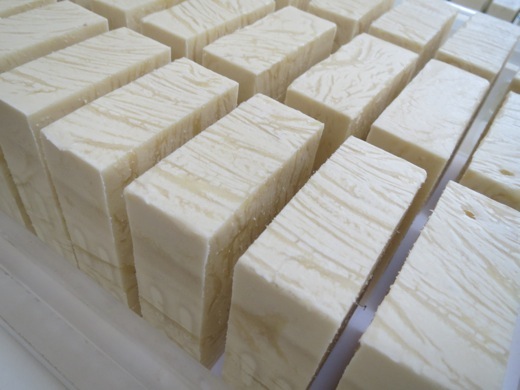 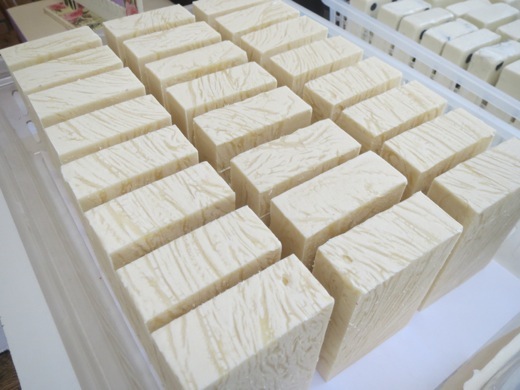 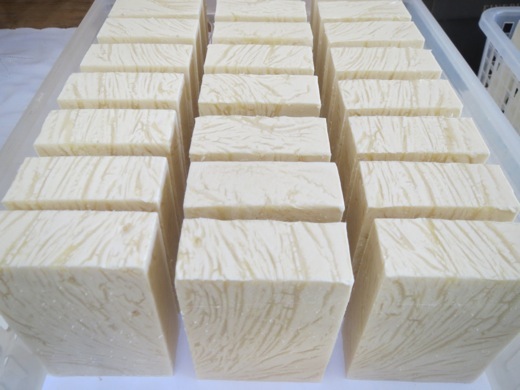 Has a post of gel  which can be seen here: http://www.japudo.com.br/en/soap-making/chemistry/.

It has been commented on in soap group of Portugal, relevant issues of the negative impacts of cultivation and extraction of palm oil, made from a non-sustainable, socially incorrect by the world’s largest producers, Indonesia and Malaysia.

I had already commented on this issue post – “Palm oil can be sustainable?”: http://www.japudo.com.br/en/2013/01/01/can-palm-oil-be-sustainable/

People more mobilized want to ban the use of palm oil in handmade soap and both seek alternative formulations that do not contain the palm. It is perfectly possible to make a formulation without palm, palm remembering that is rich in palmitic acid and stearic acid rather than the acids are saturated giving the required hardness to the soap. The rule then is to seek butters and oils that are high in palmitic and stearic.
There are no many options and usually expensive compared to the palm. They are, cocoa butter, shea butter and rice bran oil.

I was curious to know what would be the impact on costs of replacing palm for these more expensive raw materials.

I contacted Amanda Griffin and she kindly gave me permission to publish these formulas here on the site.

I did the analysis and the result shows a large impact on costs. Reaches almost double the cost and the best of the alternatives, the cost increase is 57%.

This same analysis done for the conditions of Portugal and there is also a strong impact in general. 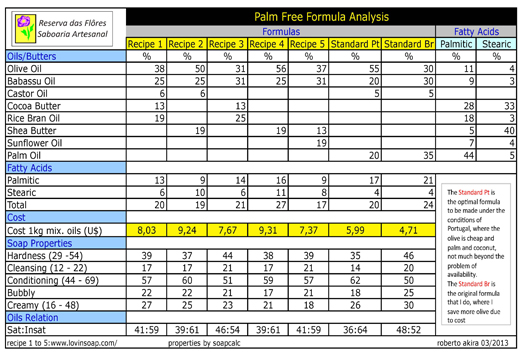 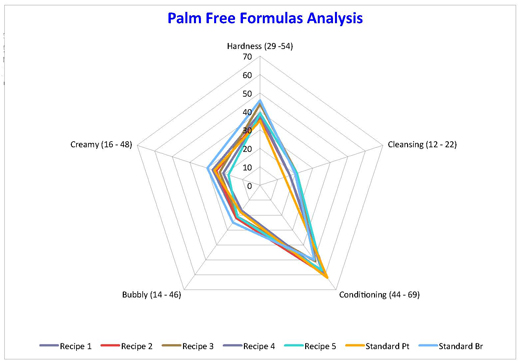 Our luck is that Brazil is the 7th producer of palm oil and different other giants of Asia, our production is done in a sustainable and responsible through the serious work done by the largest company headquartered in the state of Pará

If someone wants the complete spreadsheet, please contact me.