After the problems faced by the Aleppo soap due to the conflict in Syria, now the soap from Marseille is in danger of disappearing!  This matter was passed by Beth Bacchini and was published on 14.12.12 at:
http://www.laprovence.com/article/economie/le-savon-de-marseille-en-danger-tout-le-monde-sen-lave-les-mains
It was translated from french to portuguese, gently, by Paula Oliveira from Portugal and by me to English.

The largest plant is in receivership 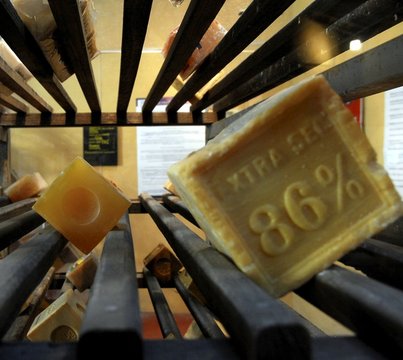 This 300g cube made since the Middle Ages, would have revolutionized an entire economical row in Provence.

Only, there is the famous Marseille soap has not still protected label. Nothing. Nothing. Worse, his name fell right in the public domain.

And most printed products as Marseilles soap, are not, they are manufactured in Asia. A direct consequence: one of the last two major soap factory in the region, the Fer à Cheval in Sainte-Marthe, is in receivership since October 31. A blow to this flagship company of know-how, acquired and later sold by Henkel, who in January will lose 12 people.

“However, we are the only ones capable of supplying the market with real soap from Marseille, while all others are stealing the name!” says Bernard Demeure, CEO of Compagnie des Detergents du Savon de Marseille, ie the soap manufacture Fer à Cheval, which he bought in 2003. A company that produces less than 2,000 tons of fashion flatter with this ultra natural soap, claimed by dermatologists and fans of ecology.

The competition is fierce
And it comes from Malaysia and Italy. More cruel still, brands like Petit Marseillais giving cards with their lavender and honey shower gels are pure product of Johnson & Johnson! Le Chat are produced in Germany by Henkel, Chantecler in Italy … ! Just reading the composition. Currently, four saboarias defend the historical tradition.

“With the Cours Julien in Le Serail, Marius Fabre in Salon, the Savonnerie du Midi in Aygalades, formed an association to fight against counterfeit products!” They also created the Union of Professional Savon de Marseille with a letter based on three specific criteria: composition, method of manufacture and geographical origin.

“But we’re in an observation period until April. So I try to take all measures necessary to sustain the business, as the factory store. But I’m shocked that anyone do anything to protect him. Marseille does not care even for a product that did its history, for installations dating from the 19th century. Remember there was a time when 30% of the working population worked directly or indirectly for soap manufacture. ”

Single output also for Bernard Demeure: Protected Geographical Indication (PGI), the European official seal of origin and quality that protects geographical names and offers a possibility to determine the origin of a food product when he gets some of its specific origin of this. “This statement could be open for manufactured products.

“And the rest of Savonnerie du Fer à Cheval would like to get their hands on in 2013.” Two years ago we worked on a project with the company Générik Vapeur for a 30 tons soap! A month of opening, has not yet found a space even though the emblem of the city and a product that makes you dream the world. ” Actually, what it is is a battle: “If I wanted rid of them, these three hectares of the plant has long been transformed in a supermarket.”

The sentence in question anyway chill down your spine: “If we close within 6 months, this means that the soap made in Marseille will be over. We also lose a part of our history. ”

Mr Montebourg, there is more to life than the sailor blouses … * Protect the “Genuine Marseille soap”! )

*translation note: refers to a brand of the sailor blouses brand Armor-Lux on which there is a controversy whether they are made in France.
Translated from french to portuguese by Ana Paula Oliveira Barreto