When one wants to calculate the amount of alkali (soda or potash) required to saponify a certain amount of oil or mixture of oils, the calculation is straightforward and direct. It is a calculation based on the stoichiometric ratio of the saponification reaction, a chemical reaction. It can be done manually, requiring knowing the saponification index (SI) of every oil or with the use of various calculators that are online.

Having the amount of alkali – I will refer to lye to ease, the question arises: how much water should I use to make the solution to dilute the lye? Many people do not ask this question because they use the calculators and the two main, already provide a default value.

In Soapcalc is 38% water over oils as a percentage of , the Mendrulandia provides 28% lye concentration.

The person take those values and leave to make soap. It turns out that in most cases these are not ideal for making soap. The Soapcalc still makes a reservation that its default value is for those who are starting and after gaining experience, changes to other levels of higher concentration of lye. The explanation of making a Mendrulandia involving the types of oils and concentration for use. What is bad is that on both calculators these explanations are lost in the middle of the instructions that most do not read.

There are three ways to express the amount of soda and water when it will make a handmade soap:
1 – Water as a percentage of oils
2 – ratio water: lye
3 – Concentration percentage lye

The first two modes are actually not express the scientific a solution concentration of solute / solvent. It is like expressing measures mass / volume as a tablespoon, teaspoon, cup, which has historical reasons behind when the resources available today were rare and expensive. 20 years ago, who could buy a digital scale?

The most correct concentration is expressed as percentage of lye. Explains the amount of soda and water present in 100g of solution.

I made a table to show that the concentration of lye can be optimized according to some feature of the soap you want to do, its composition of oils, the knowledge of who is going to do, the way you want to do the soap and also the interference some essential oils and additives. 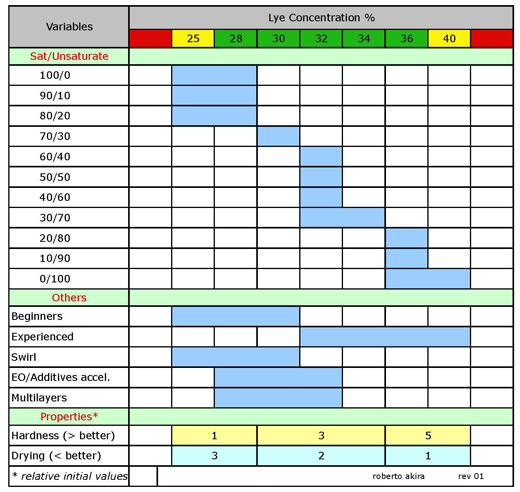 I will mention only the two extremes of the ratio saturated / unsaturated. At most of the relationship 100/zero sat / unsat is 100% coconut soap. Whose sole oil is what contains the saturated fatty acid lauric that can be coconut, palm kernel and babassu. The trace of this soap is very fast and saponification is exothermic, ie, generates a lot of heat. Here it is necessary to work with a low concentration soda (plus water) than usual, somewhat below 30%, which favors a better control of the stroke and can also prevent cracking of the soap in the mold.

The other extreme is revered soap 100% olive oil, the sole component is olive oil, containing mainly fatty acid oleic a monounsaturated. Many make this soap using the default value of 28% soda concentration in calculator Mendrulandia% or 38% of water in oils calculator Soapcalc, which corresponds to 25% concentration of lye. The values lye concentration can be greatly optimized by up to 40% lye conc..