What is the trace?

Many people have questions about what is the trace that moment when the mixing oils and lye solution with stirring, the mixture begins to acquire a consistency due to the viscosity increase and reaches a point where it is ideal need to stop stirring and pour into molds.

The name comes from the observation feature wherein the viscosity is such that when placing and removing a spatula into the mass, the drained leaves a “trace”, a mark visible on the surface of the mass of soap. 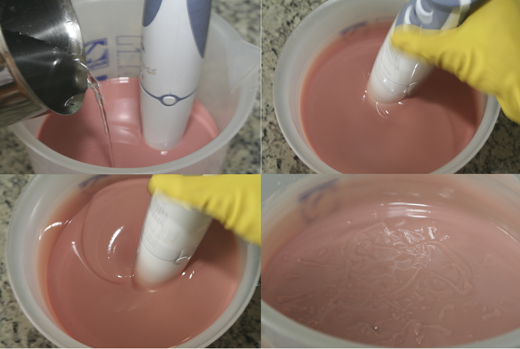 The trace can be light, medium and heavy, and the choice depends on the formulation and what you want to work with the soap. For example, if you do the swirl – technique of mixing colors forming patterns in the soap, the trace has to be lightweight to allow time to make the swirl. In the case of making soap in layers, whether of the different colors or different compositions, it is best to work with trace medium to heavy. If the formulation has components that accelerate the trace, like shea butter (high in stearic acid) or some essential oils, it is preferable to stop the unrest in the light trace.

The time required to obtain the trace is a function of the formulation components, the process temperature, the concentration of lye and the mechanical work applied to the stirring – with a kitchen mixer is a matter of minutes, if manual, with a whisk wireframe, a little longer.

If the formulation contains oils with saturated fatty acids, such as shea butter and cocoa butter, the trace is faster. Those with monounsaturated or polyunsaturated, such as olive oil and sunflower the time is greater. If temperature is bigger, faster is the reaction and tracing is faster and also to the lye concentration.

What is the physical-chemical phenomenon that happens in the trace? 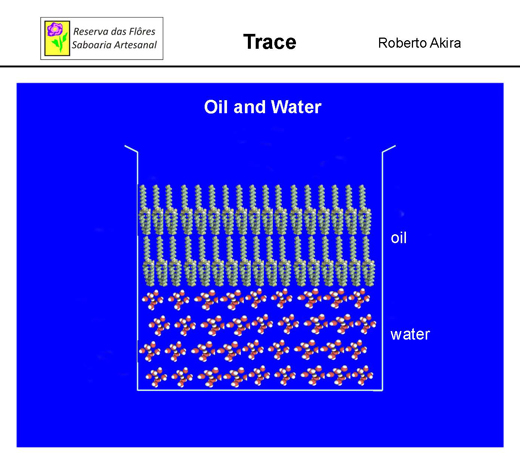 All have already observed that the oil mixed with water or vice versa, the rest water and oil separate, distinct layers forming the oil from above (lower specific gravity) and water beneath.

What does it take for the oil and water to mix stable?

The simplest way is to use products called surfactants, tensoactivities or emulsifiers. Are molecules that have an amphiphilic character, i.e. a structure polar part and and one nonpolar hydrophilic and hydrophobic.
Soap is an anionic surfactant type, ionizes in aqueous releasing anions 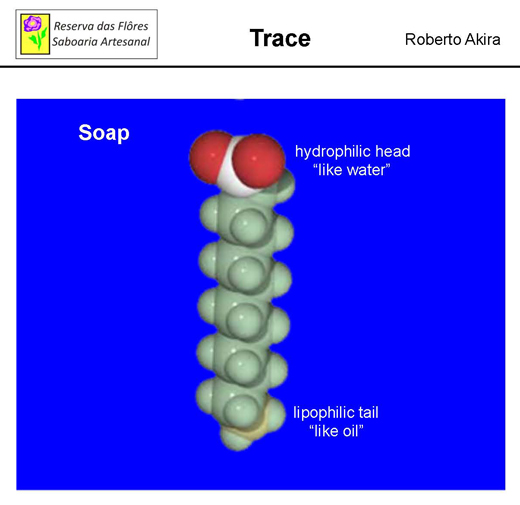 Above stereochemistry representation of a molecule of soap, with the hydrophilic head of the sodium or potassium salt and a hydrophobic or lipophilic tail from fatty acid of the oil. The head binds to hydrophobic water and the tail part of the hydrocarbon of fatty acid from oil. This affinity creates emulsion a stable structure compatibilizing oil and water. 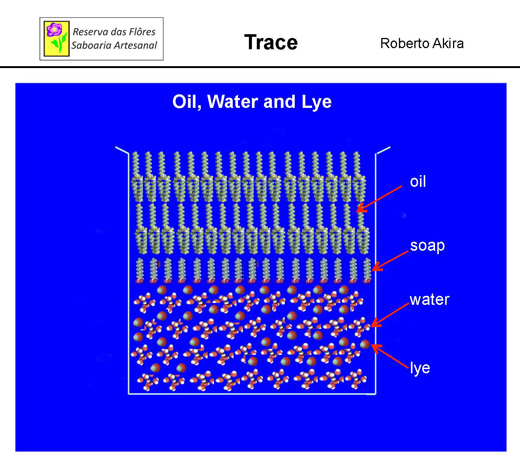 Then when mixing the solution of soda oil, an initial hypothetical situation to better explain the phenomenon physical-chemical where it is assumed that form a water-oil interface, this interface will the beginning of the formation of soap by saponification reaction. If maintained this position of rest, the reaction is stopped by the barrier and lack of physical contact between the solution of lye and oil.

If we apply a mechanical stirring this early saponification, then a break in the barrier and and physical contact between the soda solution and the oil will be enhanced by increasing the surface area of contact – breaking into micro-particles. Will start the emulsion and then our known phenomenon of trace. 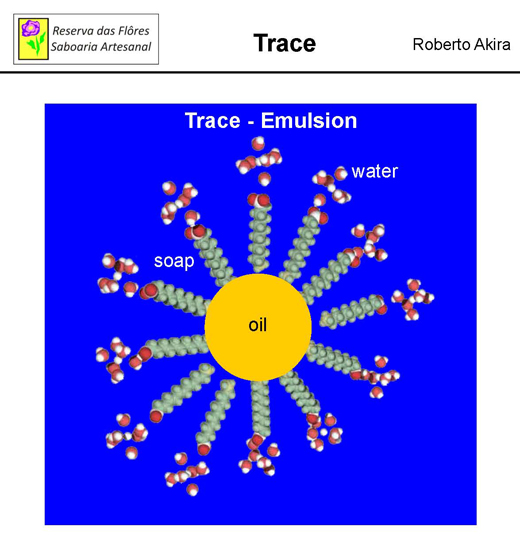 That would be the representation of the emulsion formed between water and oil through the action of soap surfactant begins to form. 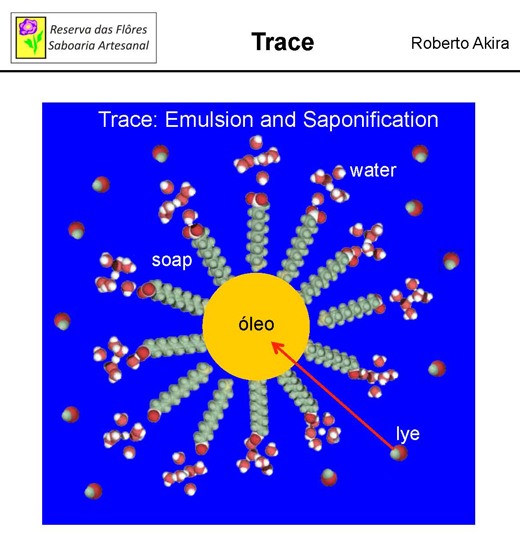